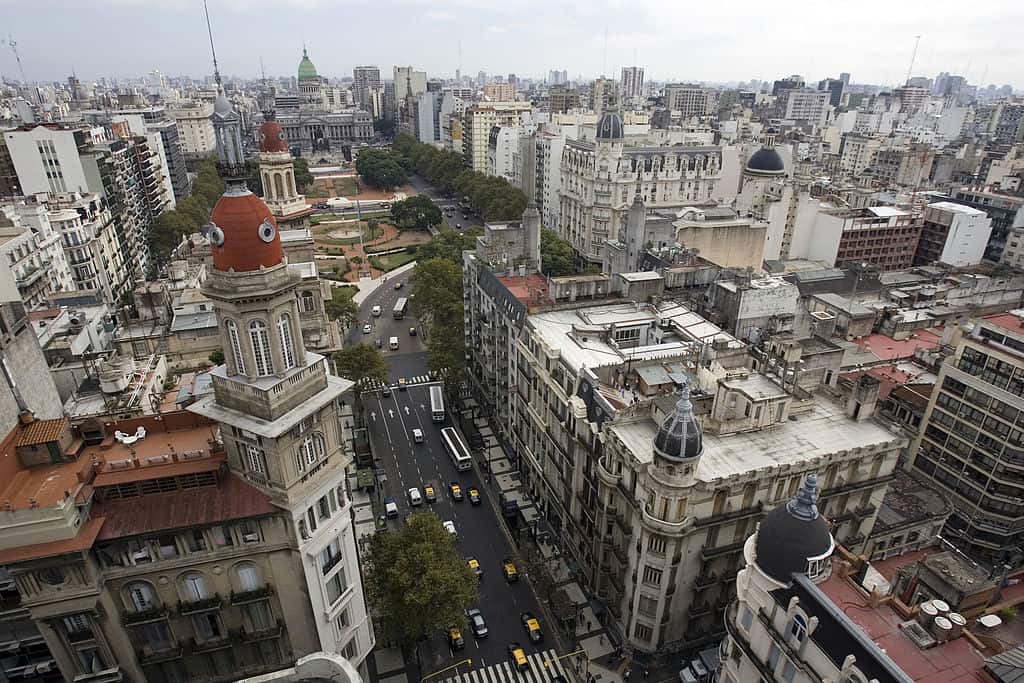 The 06 Central Hostel invites you to savor the city of Buenos Aires.

Avenida de Mayo is placed in a neighborhood called Monserrat. It is considered to be the first boulevard in the city (and the first avenue in South America), it is also the backbone of the historical and civic center. Sumptuous and majestic in its origins, as time went by it became a symbol of the Argentinian-Spanish relationship. It is also the scenery for all social demonstrations.

Starting in Bolivar Street, it runs from East to West between Hipólito Yrigoyen and Avenida Rivadavia connecting the historical Plaza de Mayo with Plaza Congreso in a ten blocks extension.

1. Set of the City Government of Buenos Aires

Built between 1891 and 1902- the architecture is work of the Italian Giovanni Cagnoni. His style is considered to be French Academicals with Italian elements. Inside you can appreciate two enormous oleos: “The foundation of Buenos Aires”, by Jose Moreno Carbonero and “Preparativos de salida”, by Benito Quinquela Martin.

Another French Academicals’ style building inaugurated in 1896 work of the engineers Gainza and Agote. At the first floor the Salon Dorado stands out: an exact copy of the Versalles Palace. It was the seat of La Prensa Newspaper. At the end of the building there is a bronze statue holding a torch and a written paper as a symbol of press freedom.

Today is the seat of the Culture Secretary of the City Government of Buenos Aires, where a number of free cultural activities take place.

El Cabildo was seat of the government of Buenos Aires in the colony times. The members of El Cabildo were elected through the public votes of the neighbors who use to meet here weekly. Giovanni Andrea Bianchi conducted the original construction. It was opened in 1740. In two centuries it suffered a certain number of adjustment, among which the loss of 6 of 11 arcades. The first government in the history of the country called Primera Junta declared here that the revolution was official (1810). It was the first expression of the independence from Spain.

Inside you can visit El Cabildo museum, the May revolution museum and the National Commission of Monuments, as well as several craft fairs.

This alley keeps the name of its first owner. It was built in 1878, but had to be remodeled after the opening of Avenida de Mayo. You can appreciate the excellence of its materials, observable in the the windows bends, the stained glass and the originals bronze carpentry of the passage. It is located in the intersection of Avenida de Mayo and Hipolito Irigoyen and is the only house that has a particular entrance to the Subway: Line A –Peru station.

In 1913 the first Subway inaugurated in Buenos Aires and in South America. The Peru Station conserves the original architecture as well as the old publicity banners.

“The London” opened its doors in 1954, and since then it is visited by politicians and business men and women. The writer Julio Cortazar wrote his play “Los Premios” on its tables. In the first page you can read: “It was in the London of Peru and Avenida…”

This Palace was built by the engineer Sanguinetti in 1912. There is a passage inside the building that connects Avenida de Mayo with Rivadavia Street.

The dome is one of the 24 of the avenue that will be illuminated by the City Government.

This art noveau Palace, with its curved lines and beveled glasses, was designed in 1910 by the architects Prins and Razenhofler as the Diaz Velez family residence. Today two libraries works here, specialized in first and rare editions.

It was founded in 1858 by a French man. Now it is the most antique cafe in Buenos Aires. The architect Alejandro Christophersen was in charge of the front part of the building when the splendid gates in Avenida de Mayo were opened in 1898.

20 years later, the Tortoni was already the meeting point for most local intellectuals. Inside the doors of the cafe there are poems, statues and paintings that reveals its history.

There is always an interesting offer of Jazz and tango concerts in the Tortoni, as well as a pool table at the back. The menu preserves some drinks in extinction, like the “merengada” milk which are worthy of trying.

The architecture belongs to Mario Palanti, also responsible for El Palacio Barolo. Inaugurated in 1929, it is one of the most important Hotels in Buenos Aires: Federico Garcia Lorca stayed here during his six months visit to the city, during the ‘30.

The Castelar was also seat of outstanding artists like Jorge Luis Borges, Norah Lange, Oliverio Girondo, among many others.

It was inaugurated in 1908 under instruction of Lope de Vega. The zarzuelas of el Avenida were a Buenos Aires’s classic. In 1979 the theatre closed due to a fire. During the re-opening in 1994, the Spanish singer Placido Domingo presented a memorable show. Today the theatre keeps its dramatic Spanish tradition.

Inaugurated in 1894, “Los 36” is also a patrimony of Buenos Aires and one of the most important centers of billiard all over the country. It has pool, snooker and billiard tables.

This art-noveau style exponent of the beginnings of the Century (The hotel opened in 1935) belongs to the French architect Jules Dubois. Its front side is full of sinuous lines and rich ornamental details.

Built in 1909 by the architects Federico Collivadino and Italo Benedetti, the hotel lodged many distinguished personalities, such as Nijinsky and Le Corbusier. Today a branch of the Federal Boureau of Public Incomes –AFIP– works here along with a museum where you can find extraordinary things like ancient instruments to make alcohol to an old trunk used to collect taxes in the XIX century.

It was the seat of “Crítica”, a popular newspaper property of Natalio Botana that had its splendor years between 1920 and 1930. Some outstanding figures of the national journalism and literature collaborated in the tabloid: Roberto Arlt, ,  Jorge Luis Borges, Florencio Escardo, Raul Gonzalez Tuñon and Ulyses Petit de Murat .

The construction was directed by the Hungarian architects Gyorgy and Andres Kalnay. Its front side shows elements from the art-deco style. Today there are some offices of the Federal Police working here.

The Barolo Palace was the work of Mario Palanti for Luis Barolo, a powerful businessman. At the time (1923) was the highest building in Buenos Aires, until the construction of the Kavanagh in 1935. Each floor was designed differently and the central dome is at the same height as a 24th floor. For many years it has worked as an office building. There is a lighthouse in its dome that is used to broadcast news.

Palatini had studied the work of Dante Alighieri carefully. The building presents a romantic neogothic style and is full of analogies and references to the Divine Comedy. The ground was based in the Golden section and thePalace is divided in three parts: Hell, Purgatory, and Sky. The lighthouse symbolize the 9 angelical choruses, the Southern Cross constellation is just above them. During the first days of June at 7.45 pm. it is aligned with the Barolo axe. The building is 100 meters in height as a parallel with the 100 chants of the Divine Comedy. The Barolo Palace has a twin brother in Montevideo: the Salvo Palace.


It name correspond to its origins, it used to be an insurance company. The work is dated in 1910 and is thought to have been done by Luis Broggi. Its red domes and general style are considered neo-renaissance. You can appreciate the statues of Venus and Apolo in the first floor.


This building is the central office of the parliament hosting the senators and deputies cameras. The italian architect Victor Meano designed it but the work was concluded by Julio Dormal after Meano’s death.

It was started at the ends of the XIX Century but it wasn’t until 1906 that it was finally opened even though it wasn`t finished until 1946. El Congreso has the biggest dome in the city.

The café opened in 1860 even if the actual building was not finished until 1917. The Italian architect Francesco Gianotti is responsible for the  art-noveau design.

This café had always been a place where politicians met because it is located in front of the Congress. It has remained closed since 1997.